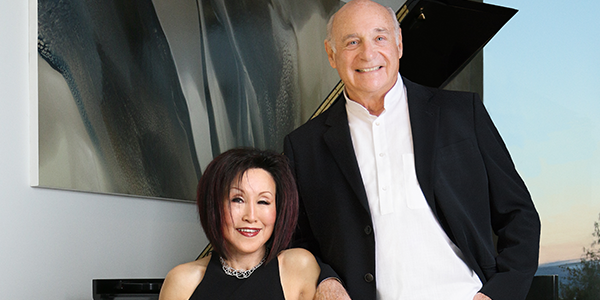 "The music brings us such peace, tranquility, and excitement, and the friendships we've made both within the community and with the young musicians and artists has given us great joy and satisfaction."

ENCORE SOCIETY POWER COUPLE Maurice Singer and Hyon Chough both discovered the Music Academy through their individual love of classical music and especially the piano. Hyon, who studied architecture and interior design at UC Berkeley and currently owns Blueprint furniture store in Los Angeles, discovered the campus in 2007 as a newcomer to Santa Barbara, and was "overwhelmed by the beauty of the campus," particularly the "majestic fig tree" and the tranquil water garden she calls "heaven on earth." To add to the experience, she then heard her favorite Chopin piece wafting from a campus studio. What magic! She immediately became a Council member and then a Compeer to the solo piano studio.

Two years later, Maurice, who studied English and economics at University of Vermont and held a succession of senior management positions in the film and television industry (including president of HBO Films) before founding Los Angeles-based Riviera Capital Management, made Santa Barbara his new home. He had heard about the Music Academy from friends and attended a solo piano masterclass taught by the legendary Jerome Lowenthal. "It was the most enlightening and entertaining two hours of classical music I had experienced since attending the Leonard Bernstein's Young Peoples Concerts in New York City as a child!" He was hooked. He even joined the Board of Directors and just completed his nine-year term. Additionally, Maurice served as Chair of the Marketing Committee, and was a member of several other committees, where he gained a "better understanding and appreciation for the work the administration does to accomplish our mission: to bring forth the next generation of great classically-trained musicians."

Their lives were forever changed when they were fatefully seated next to each other at one of Jerome Lowenthal's masterclasses in Hahn Hall. And the rest is history! They have been inseparable ever since. They mused, "We are grateful for how much the Music Academy has enriched our lives. The music brings us such peace, tranquility, and excitement, and the friendships we've made both within the community and with the young musicians and artists has given us great joy and satisfaction. All this, plus the dedication of the administration has motivated our philanthropy."

That philanthropy extends to the Music Academy grounds, as the couple made a generous gift to the Academy's general endowment fund to sponsor and endow the Moreton Bay Fig tree in front of Hahn Hall (where they met) as well as the water garden. Hyon said the two iconic landmarks "speak to the beauty of and simplicity of nature and exemplify the serenity, majesty, and grace of music. "Maurice added, "We LOVE the fact that we're able to bring great musicians performing great classical music to Santa Barbara, and that young people throughout the community are able to attend our concerts for free. We're truly building the next generation of classical music audiences. And the Music Academy allows us to experience first-hand the enthusiasm and total commitment young musicians must have to bring this music to audiences around the world."

This article originally appeared in the 2019 Summer Festival Program Book.